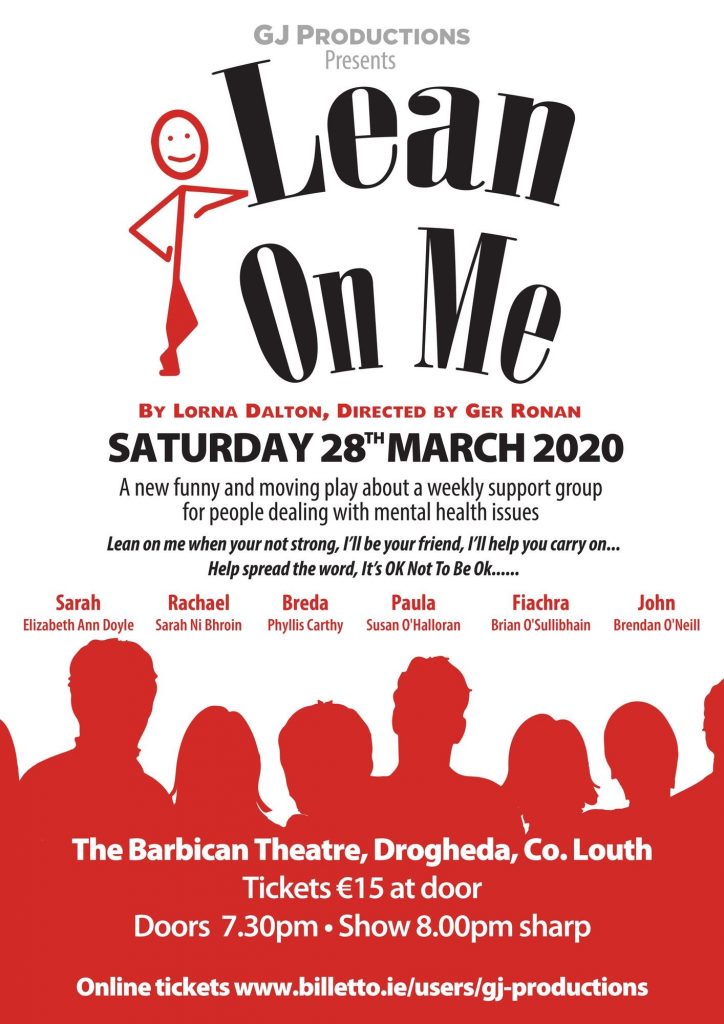 LEAN ON ME is a Mental Health Issue drama written by Lorna Kelly Dalton and Directed
By “What Would Ma Say” Director and Playwright Gerard Ronan.
The play is a Heart Warming, funny but hard hitting piece of drama centered around 6 people, Rachel, Fiachra, John and Breda, who through facilitator Paula are joined by new member Sarah at their weekly support group meeting for people different Mental Health problems in their everyday lives. Each of the characters have their own personalities and Mental Health problem to deal with. The group share their deepest darkest secrets and fears with each other in hope of seeing light at the end of the tunnel.
The play deals with such issues as Suicide, Depression, Alcoholism, Anxiety, Stress, Panic, OCD’s, Sexuality, Bullying and many others to add that may drive people to think that they are worthless or to self harm or even contemplate taking their own lives. It acknowledges the fact that there is HOPE. It illustrates also that is OK NOT TO BE OK.
Lorna is a mother of three children and a homemaker who was born and reared in Donaghmede on the north side of Dublin. She has written numerous sketches and pantomimes which have all been well received when performed by local Theatre groups. Her first full length play LEAN ON ME is her response to her own feelings of helplessness when dealing with Mental Health Issues that arose between her own family and close friends. Her play tells the stories of members of the weekly support group as they go about confronting and dealing with their separate Mental Health problem in their daily lives.
Director and Playwright Gerard Ronan founder of GJ Productions was delighted when he was approached by Lorna and asked to direct the play. He says “Mental Health is a huge problem in our society at the present time we live in and it is our intention to help people to deal with their issues through the medium of theatre and drama. I was so moved by the humour, strength and tenderness of Lorna’s writing that I felt the play simply had to be given a full professional production.”
Lorna added “I want to spread the word that “It’s OK not to be OK”. “The huge task is lifting the stigma associated with depression, anxiety and other Mental Health Issues and must be addressed. I appreciate the invaluable help of all media in getting that job done. Together we can make a difference.”